The recipients of the Pierre du Bois Prize in 2022, awarded annually for the best doctoral thesis in International History and Politics defended at the Geneva Graduate Institute, are, ex aequo, Dr Michele Sollai and Dr Joel Alfred Veldkamp. 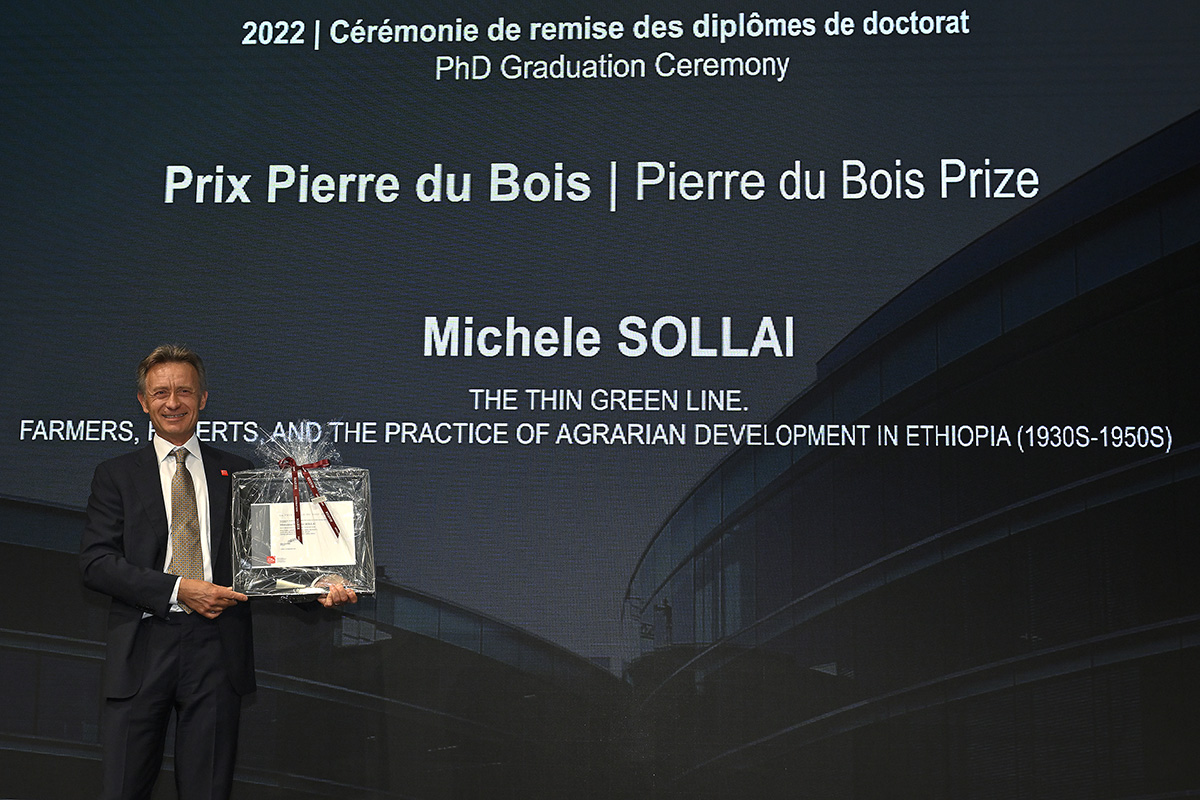 Dr Michele Sollai received the prize on 16 September 2022 for his thesis “The Thin Green Line: Farmers, Experts, and the Practice of Agrarian Development in Ethiopia (1930s-1950s)”. ‘The Thin Green Line’ is an exploration into the vast, complex and still largely uncharted history of agrarian development in Ethiopia. It follows the historical trajectories of the farmers and experts that shaped the practice of development during the Italian colonial occupation, the Second World War and in the 1950s. While considering the rationale and aims of the various development blueprints advanced by the fascist regime, the Ethiopian government, and international agencies from the 1930s to the 1950s, the dissertation focuses on how development ideas and projects were understood, lived, and transformed by local actors “on the ground”. By doing so, the dissertation reveals the multiple connections and continuities that characterized the evolution of agrarian development in Ethiopia during this timeframe. Albeit thin, and often concealed in plain sight, a “green line” of continuity run beneath and through the major political shifts, economic and social changes characterizing the history of Ethiopia from the 1930s to the 1950s.

The Dissertation could not have been thought and written without the constant and precious feedback of Michele’s PhD supervisor, Professor Amalia Ribi Forclaz. 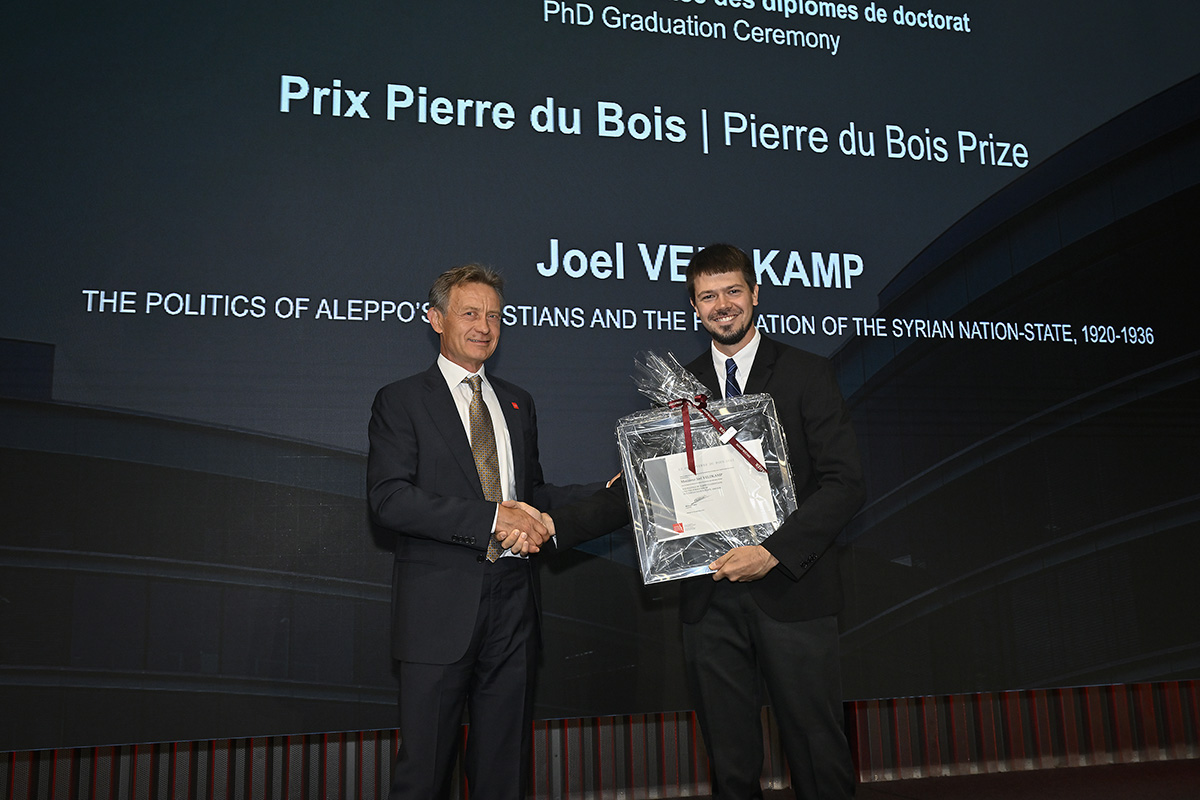 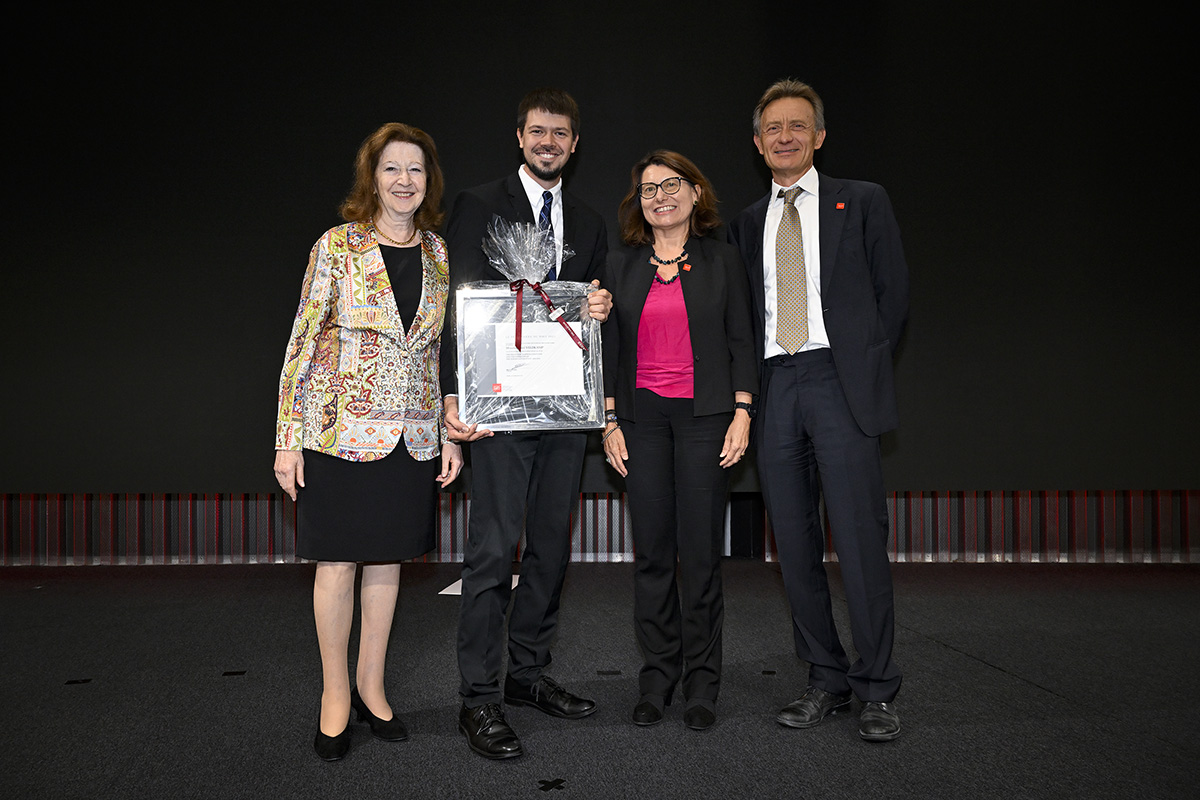 Dr Joel Alfred Veldkamp received the prize on 16 September 2022 for his thesis  “The Politics of Aleppo’s Christians and the Formation of the Syrian Nation-State, 1920-1936.” This thesis examines the political discourses and practices of the various Christian communities in Aleppo during the first part of the French occupation of Syria. In particular, it explores the often-tortured relationship between Aleppo’s Christians and the Syrian Arab nationalist movement, which was working to unite the territories occupied by France into a novel nation-state defined by Arab national identity. Using sources in Arabic, Armenian, and French, the thesis pursues this question through the lenses of collective memory, the settlement of tens of thousands of Christian refugees in Aleppo in 1915-1930, the issue of Aleppo’s autonomous status, the petitions sent from Aleppo to the League of Nations and the French authorities, the elections held in Aleppo during this period, and the paramilitary movements created to contest the political status of the city in 1936. The thesis concludes that the political choices of Aleppine Christians in this period were mediated by their religious identity, and that despite the prominence of several Aleppine Christians in the nationalist movement, Aleppo’s Christians a whole formed a locus of resistance to that movement which had no parallel in the other cities of Syria. This resistance continued from the beginning of the French occupation until 1936, when the French authorities elected to form an alliance with Syria’s nationalists, and worked together with them to crush Christian dissent in Aleppo. This thesis adds to the understanding of the origins of the Middle East’s current nation-state system, and especially, the role that religious identity and religious solidarity played in its creation.

Dr Veldkamp is immensely grateful for the constant support provided by his doctoral supervisor, Professor Mohammad-Mahmoud Ould Mohamedou, throughout the dissertation-writing process, as well as for the valuable feedback from his second reader, Professor Cyrus Schayegh.

Dr Veldkamp received his master’s degree in Middle East Studies from the University of Chicago in 2016, and his bachelor’s degree in political studies from Dordt University in 2010. He worked and lived in Damascus, Syria, in 2010-2011, and received fellowships for language study in Armenia and Jordan. He currently works for Christian Solidarity International in Zurich, Switzerland. He is also the editor of the Syrian Studies Association Bulletin.

The Pierre du Bois Prize is awarded annually to the best doctoral thesis in contemporary history defended in the International History and Politics Department at the Geneva Graduate Institute for International and Development Studies. It is worth CHF 5000.-.